There are still random crackdowns taking place periodically in residential communities in the city of Beijing. As well, following the capital’s lead, many cities in China have started their own versions of cracking down on big and un-registered dogs. 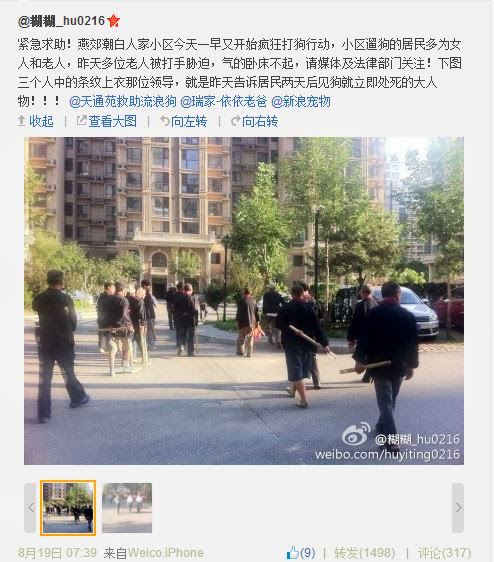 Aug 19th, a Weibo (Chinese version of Twitter) user posted an urgent warning about a dog capture action being undertaken in an residential community in Beijing. The post states following: Most of the dog owners in the communities are senior citizens and women. People in the picture with wooden sticks are searching for residents who are out walking their dogs. They threatened several old people that they would terminate their dogs if captured. The post also urges the local authorities to look into this barbaric acts and end this injustice.

July 31st, police departments from six different regions in Xi’an worked together and started a city wide wipe out of big and un-registered dogs. During the peak dog-walking period of the day, they targeted the most popular dog walking areas such as parks and city squares for potential dog “criminals”. In just four short hours, they successfully confiscated sixty-one “canine suspects”. 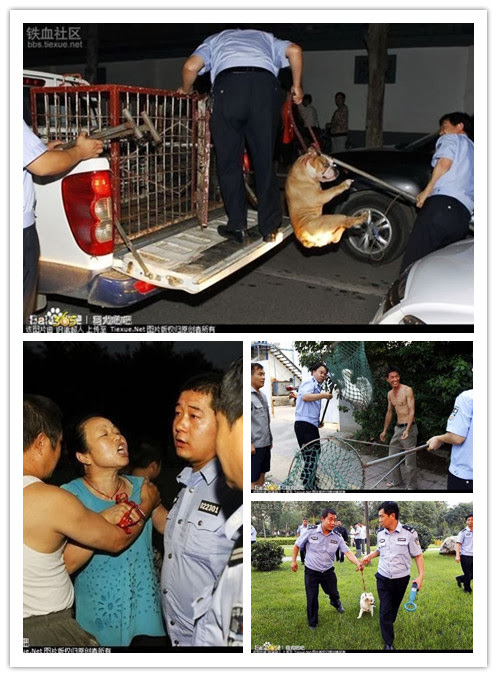 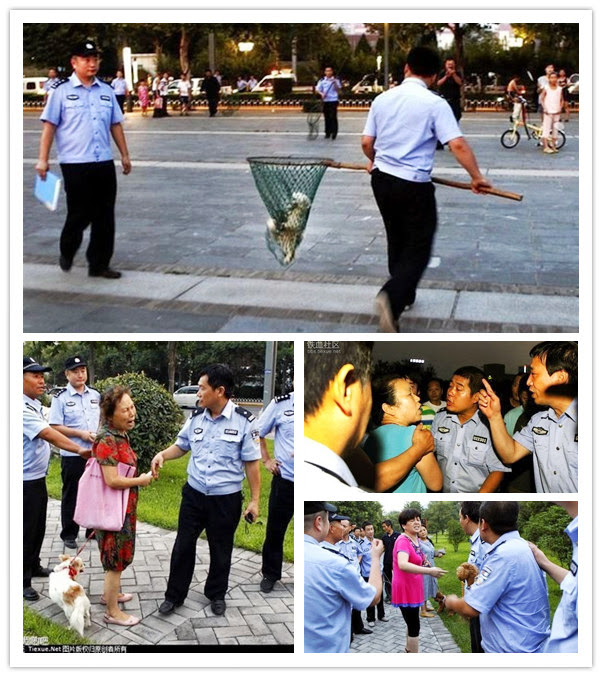 Dog owners are fearful for their dogs being possibly taken every time they take them out for a walk or to use the bathroom. Most of the dog owners only take their dogs out in the very early morning or very late at night to avoid the dog capture teams. The following are the government’s reasons for using the tax payers’ money to call up an army of law enforcers to search and arrest fury, soft, four-legged “criminals” throughout the city:

• Big dogs are dangerous and a threat to the general public as they tend to be aggressive towards people, plus they look scary.

• All dogs should be registered and owners must pay an annual registration fee (The amount varies depending up the particular city or area. In Beijing, for instance, first time registration is around $160 for un-neutered dogs and $80 for neutered; around $80 to renew the licence).

• Dogs have been causing disturbances to the general public and destruction of public spaces. 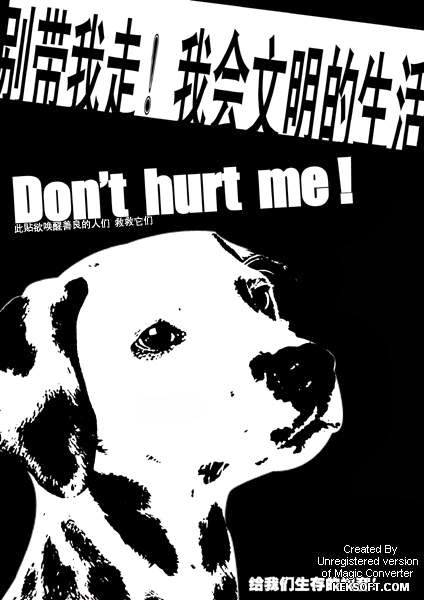 The poster reads: Please don’t take me away, I am a part of a civilized society.

Banning dogs based on their size is just plain ridiculous and uneducated. How about the dogs that have not been registered as required by the government? Should they be confiscated? In China, this happens to be a rather controversial issue due to mixed signals, infrequent enforcement of laws, and rampant corruption.. I am all about city management and guiding people to be responsible and considerate urban residents and pet owners, even if that means requiring that people pay fees. We pay taxes and hundreds of other fees to the local government so that they can improve the public infrastructure and our quality of lives as residents of the city. Well, at least that’s the idea, right?

Many cities elsewhere in the world also ask their pet owning residents to register their pets and pay certain fees. In the city where I live in America, for instance, I needed to register my dog. I paid the required annual registration fee of $15, as well as an annual dog park permit for an additional $35. In return, I can take my dog to any dog park in the city, all of which are well maintained. If my dog was not registered, and we were caught in the dog park by the city park officials, I would be fined $200 and asked to get my dog registered as soon as possible. I would then go back home WITH my dog and be mad at myself for losing $200 for being a cheap a** irresponsible resident of the community. AND, I would MAKE SURE that I got that registration fee paid the very next day.

Dog owners in China are required to pay almost 10 time as much as we do in America, but they don’t receive any benefits as pet owners from the government. The concept of “pet friendly public areas” does not exist. There are no dog parks where people can take their dogs to play, run free, or get their exercise. People have no choice but to take their dogs to parks in their neighborhood, out onto the street, to grassy areas in their housing community, etc. The city management office and the housing management offices then start to receive complaints about dog poop being everywhere, dogs barking at night, big dogs scaring children, etc… It then takes no time for the authorities to come up with the genius idea to solve the problem – ban big dogs and VIOLENTLY confiscate all the unregistered dogs.

So is there really nothing that Chinese dog owners can do to protect their dogs? Yes, even in a difficult situation and place for dogs and their owners like China, there are a few things people can do to better protect their dogs from being tortured and killed. These things turn out to be basic rules for being an responsible pet owners and doing essential things such as: keeping dogs always on a leash when in public, always cleaning up after your dogs, never leaving your dogs unattended, always making sure their vaccinations are up to date, always giving your dogs the appropriate medical care if needed, never abandoning your dogs etc. I hate to say this but many of the dog owners in China have not done a good job of following these rules and have left their four-legged family members even more venerable in an already extremely dangerous place. So what else can they do provided that some of them are already doing all the right things to be responsible pet owners? There is only one thing left to do – Pray.

While animal rights and protection groups and individuals have been continuously promoting responsible pet ownership, the authorities have created their own method of “helping” people to be responsible pet owners and consequently thrown the issues into a big vicious cycle with their uneducated and barbaric “solution”. The order to crackdown on dogs serves the general public no good but accelerates the conflicts between pet owners and the general public It instead reinforces the uneducated idea and a false understanding of dogs, especially large sized dogs, as well as demonstrating violence and barbarity to children.

In a country where people still have no rights as pet owners, and their pets are not protected by any laws, ironically, there are plenty of ridiculous laws (existing ones passed by nameless bureaucrats or instantly created by witless officials) that Chinese pet owners have to comply with such as the 35cm restriction on city dogs and the crackdowns on dogs in the name of striving to be a civilized society!

You may say “I would still pay whatever they required me to, so at least my dog would have a chance of not being taken in the crackdown.” Many dog owners in China have thought the same thing every time there is a crackdown. As a result, the authorities have harvested tens of millions of RMB just in registration fees during each of their dog capturing wars, and the dog owners continuously carry on their lives in fear for the safety of their beloved dogs. 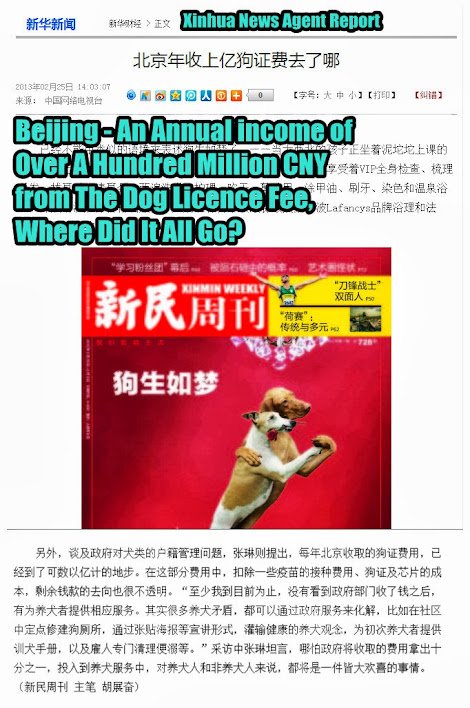 The chief editor of magazine “Dog Lovers”, Lin Zhang, talked about the government administrated dog licensing issues. She said that the annual income from the city dog licensing branch is over a hundred million RMB. Aside from the cost of giving mandatory vaccination, microchips and making the license ID card, it is not clear where the rest of the money went. “As thus far, I have not noticed any service/benefit provided to the pet owners after the registration fee has been charged. The reality is that most of the conflicts and issues relate to pet ownership exist in our community can be solved through effective government sponsored service/programs. For example, making certain areas in the community designated for dog activities; educating people about healthy and responsible pet ownership through public posters, offering educational brochures; hiring cleaning crew to maintain the public areas to be pet waste free”. During the interview, Lin Zhang said that it would bring a huge change and improvement to everyone’s life in our community even if the government only spent a tenth of the total amount of license fee that they have collected from people on providing service/benefits for the pet owners.

Is this the end of all big dogs in Beijing?