A dog smuggling truck was spotted with approximately 1,000 dogs on board on a highway near Guiyang. A rescue attempt was initiated once the news went out on Weibo (Chinese version of twitter). The result has been surreal… :-

There were 9 volunteers following the truck on the highway’ most of them were on motorcycles. They tried to stop the truck but failed, as the smuggler was VERY aggressive and ruthless in his driving. The smuggler only sped up the truck and threatened to run over the volunteers when they attempted to stop the truck! Meanwhile, people throughout the country were calling on the Guiyang government authorities to pressure them to take immediate and appropriate actions. The local police department was notified and also attempted to stop the truck by setting up a check point. Incredibly, the smuggler did not slow the truck but instead sped up and broke through the police check point!! The last update I have received is that the truck has now left the jurisdiction of Guiyang-Guizhou Province and entered Guangxi Province, one of the largest dog meat consumption regions in China. The possibility of any further rescue attempts within Guangxi is low… 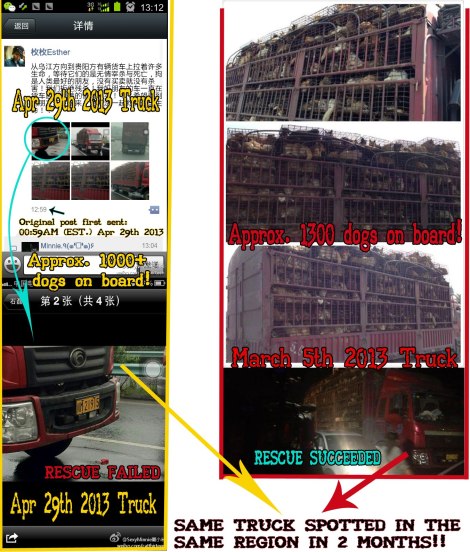 The dog smuggling gang that is believed to be responsible for this truck is headquartered in Jianyang – Sichuan Province. Jianyang is believed to be one of the largest dog meat trade centers in China. The underworld community in Jianyang is believed to be very violent and sadistic. On March 21th, a truck with 1000+ dogs on board were spotted and stopped by three activists. The rescue attempt failed with all three activists being beaten and their car being destroyed by roughly 50 dog meat smugglers and their gangster accomplices. (Please read about this story here: https://www.facebook.com/photo.php?fbid=507823929280530&set=a.499914463404810.1073741828.499878786741711&type=1 )

The sad truth is that there are many such trucks everywhere in the country transporting dogs as well as cats on a DAILY BASIS. The number of the dogs on each truck ranges from anywhere between 100 – 1,500. Regions where dog meat is in high demand can get traffic as high as 20-40 trucks PER DAY in a normal day! The number increases during the “dog meat season” (usually in winter, and also early summer in a specific region in southern china). Among all of these dog/cat smuggling trucks, some were spotted, a few were stopped, and even fewer have been involved in a successful rescue…

The critical issue here is about far more than the lack of any specific Animal Cruelty Laws in China. These money thirsty barbaric dog smugglers continually violate laws that already exist throughout their entire operation, namely:

According to the law, before any animals can be transported for human consumption, they must be deemed healthy, quarantined, and a Health and Inspection Certificate must be issued by the local Animal Inspection Department. In the case of dogs, a certificate must be issued for EACH dog. Any unhealthy animals or those that have died from an illness or unknown reasons are not allowed to be transported, slaughtered or sold for human consumption.
All of the dog smuggling trucks contain dogs in dire health conditions, many of which are actually infected with highly contagious diseases such as Distemper and Parvovirus. Unfortunately, an Animal Health and Inspection Certificate can be easily purchased through illegal channels without any kind of inspection having been first conducted by the responsible officials. This certificate indicates the number, breed, and health condition of the animals, as well as the purpose for which the animals are being transported. Due to the intense levels of corruption in China, smugglers are even able to obtain blank forms with official seals and signatures already in place!

After all that they suffer along the dark, rotten chain of events that is the dog meat trade, these poor dogs end up carrying a multitude of diseases and toxins before they reach the end of their tragic journey. They are by no means safe for human consumption.

The dark and rotten dog meat black market is NOT legal in any way in China, even without any animal protection laws in place. It is the severely corrupt government authorities who shamelessly allow these crimes to continue and grow! All of the crimes committed during this trade of shame are often ignored by the authorities. The people and groups who try to stop the crimes are often discredited and oppressed by the authorities. It is scary and sometimes hopeless to just think about how dark and deep this hole actually is.

The infamous dog meat trade brings out the absolutely ugliest and darkest side of humanity – greed, brutality and betrayal.

The activists in China are fighting an incredibly difficult battle in an environment where literally everything is against them. While it may seem like we are fighting a losing battle, we cannot ever lose heart. We will NOT lose this war as long as we keep up the fight and remain standing up for what’s right! No matter the odds, we can never allow ourselves to believe that good will not overcome evil.

I know you must be very angry, and you should be. I understand that many of you more than likely have a very low opinion of China and Chinese people as a result of what you see and read here. I can sincerely empathize with all of these feelings, but I challenge you open your hearts to those Chinese people who are willing to stand up against the evil, corruption, and violence that is the sickness in their world. I ask that you replace any negativity in your mind with a respect and admiration for the brave and lonely people who are sacrificing more than most of us can imagine to fight for what is right. Stand with them here and join your voice with their actions to help build the future that we all dream of.

We need your support, now, more than ever before. 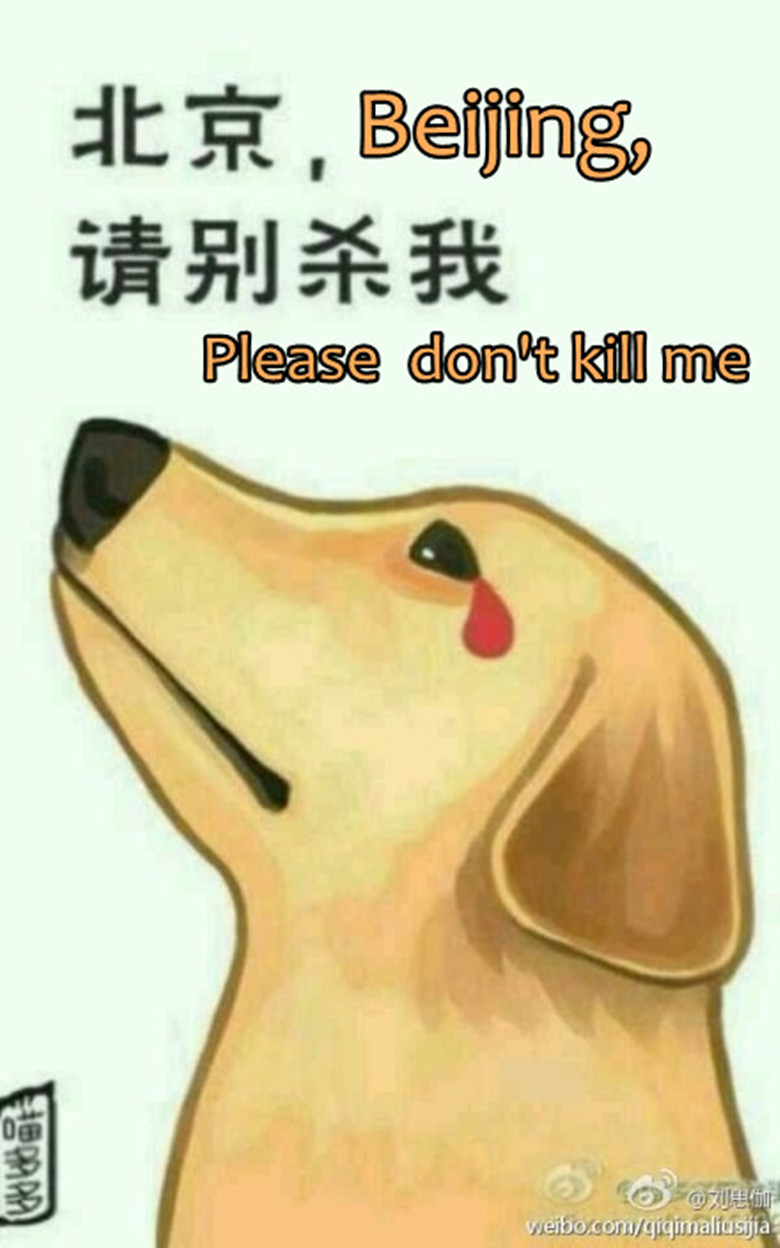